The Federation of Khasi-Jaintia and Garo People (FKJGP) organised an ‘anti-unemployment rally’ in Shillong, Meghalaya on Friday, October 28. The rally participants suddenly started violent attacks on non-tribals while circling the city. The FKJGP attackers then checked the number plates of vehicles on the road and started attacking vehicles from outside Meghalaya on sight.

The video of their attack clearly shows that the non-tribal population is the primary target of this attack. This racial attack is not the first time. In 1979, about 20,000 Bengalis were displaced following attacks by the Khasis. Xenophobic racial attacks were reported from Meghalaya even during anti-CAA protests in 2020. Last year, two students from Kerala interning with a Shillong-based NGO were attacked and before that, 5 non-tribal youth playing basketball were suddenly assaulted with rods and sticks. 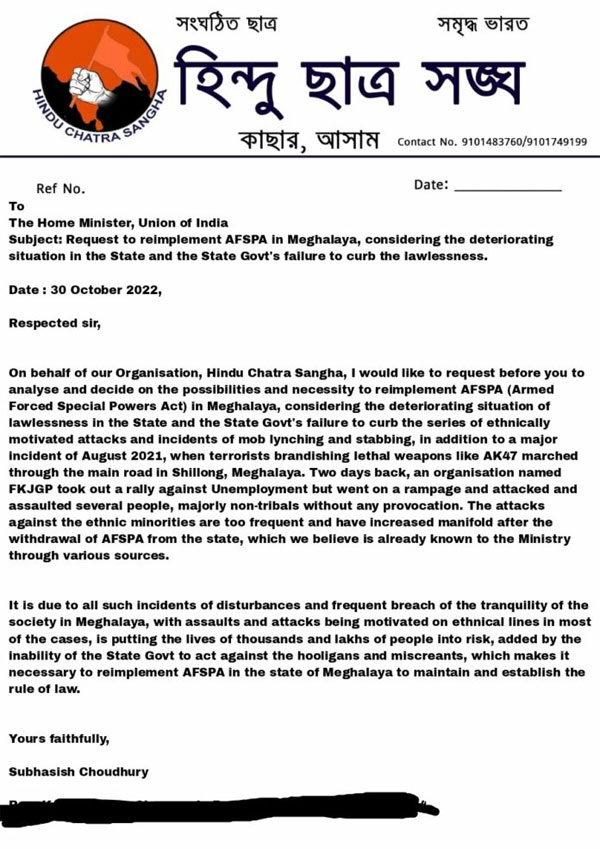 The UK/Scottish Presbyterian Church is suspected of playing a key role in fomenting anti-Hindu hatred in this Christian tribal-state where over 86% of population belongs to Scheduled Tribes (STs) and 74% are Christian as per Census 2011.

In one of the videos, an injured tempo driver, visibly non-tribal, was seen lying sprawled on the road after purportedly being beaten up. According to a news report in the Shillong Times, a local reporter, U Mawphor, was assaulted for recording videos of the attacks.

In one video, a riot-gear clad policeman was seen walking along with the rally but did nothing to stop an attack on an innocent motorist.

Since the attack, the non-tribal population of Meghalaya and the neighbouring state of Assam have simultaneously expressed anger and fears that various groups are once again trying to destabilise the region. On the other hand, apart from physical attacks, another so-called tribal organisation has started hateful racial attacks against non-tribals.

Incidentally, an advertisement titled “Cherapunji Ki Diwali” was released by Netflix before Kali Puja. In protesting against the advertisement, an organisation called KSU termed Bengalis the ‘scumbags of the British’.

The protest was called against the recent incidents of violence in Shillong by FKJGP members and KSU’s statement against the recently released ‘Cherrapunji Ki Diwali’ ad, in which they defamed the Bengali community. 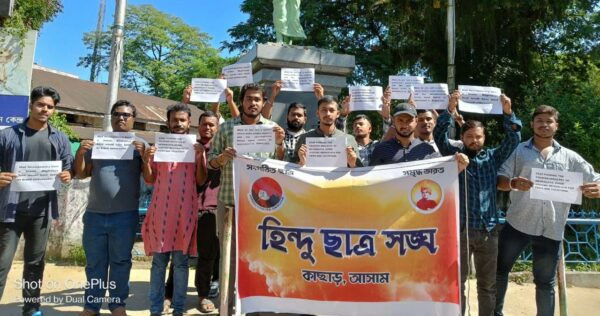 While elaborating on the issue, the Hindu Chhatra Sangh representative Subhash Choudhury said, “The incident in Shillong, where FKJGP members attacked innocent people, non-tribals being the primary target, in the name of their rally against unemployment, is not a sudden unfortunate incident but a continuation of a series of unfortunate incidents, contributed by several different organisations from time to time. The Meghalaya government has failed over the last many months and years to control such hooligans and uncivilised mobs, and they have developed the courage to mob lynch anyone due to such administrative failures alone. It is time that the AFSPA (Armed Forces Special Powers Act), which was lifted from Meghalaya in 2018, is implemented again. Terrorists marching with guns on the roads of Shillong is not a very old incident. The government is either unwilling or not capable enough to act against the anti-social elements there. Only the implementation of AFSPA can fix such lawlessness in the state of Meghalaya.”

Commenting on the statement by KSU, where they stated the Bengali community as ‘Chamchas of British’, to protest against the Netflix ad “Cherrapunji ki Diwali”, Subhash said, “The community that has sacrificed the most number of lives and blood for the freedom movement in Bharat is being called ‘Chamchas’ of British. This does nothing but symbolise the lack of education and knowledge among the top brass of the KSU, who essentially lack the sense to state or argue on any logical ground but just propagate plain hatred. “

The recent spate of attacks on non-tribals, especially Bengalis, in Meghalaya and its adjoining areas brings back memories of the seventies. The Meghalaya government’s silent role against the perceived racial attacks by the local non-tribal communities not only points to their support but also points to the reactivation of separatist groups, creating a destabilising environment in the North East region.

(This article was originally published in hindupost.in and has been republished here with permission.)